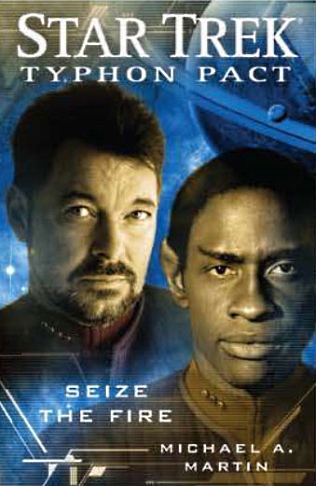 Shortly after making the stunning revelation that it has joined the Typhon Pact, the Gorn Hegemony suffers an ecological disaster that destroys the hatchery world that nurtures their civilisation's warrior caste. The rest of Gorn society quickly tries to find a replacement warrior hatchery world. The Gorn had already been investigating traces of an ancient but powerful "quick terraforming" technology left behind by a long-vanished race that may have been responsible for the habitability of many of the worlds on the Gorn frontier. Such a technology promises to restore the Gorn civilisation's status quo, but if certain Gorn factions gain control of the technology it will upset the balance of power within the Gorn Hegemony and the Typhon Pact. Two galactic quadrants will be in danger - and the civilization on the planet Hranrar will become extinct.

The second book in the Typhon Pact mini-series, which is also the second Trek book that Michael Martin has written solo, is a fairly run of the mill adventure. When a natural disaster destroys a Gorn breeding planet, two factions set out to find a replacement. The discovery of an ancient terraforming technology looks promising, but Will Riker and the crew of the USS Titan are afraid it could also be used as a weapon.

This novel occurs roughly simultaneously with the first Typhon Pact novel, but other than a few mentions it could have occurred anywhere in the Trek canon. It's a fairly standard story of alien technology, prime directive problems and arguments with the Gorn which seems to have almost no bearing on the continuing storyline. This is a little disappointing as I was hoping for something that would continue developing the plot.

The plot itself seems quite slow moving, and made hard to read by the Gorn speech being rendered in a 'Gorn phonetic dialect' which seems unnecessary given that they wouldn't be speaking English anyway. The action tends to stay in one place, and the different factions and number of named Gorn become a little confusing.

In terms of style it is very similar to the Bashir book which precedes it - both focus on one of the Typhon Pact's member races, showing them to be more than just a warmongers, and dealing with aspects of racism that pervade in the characters. It's more similar though to the earlier Titan novels, but it's far from the best of the bunch. I personally feel that Martin's writing has lost something since he stopped collaborating with long time writing partner Andy Mangels.

Overall I was a little disappointed. I was expecting something a little more grand and focussed on the Typhon Pact plot rather than a day in the life of the Titan. Hopefully the remaining two books in the mini-series will get things back on track.