The Coming of the Terraphiles 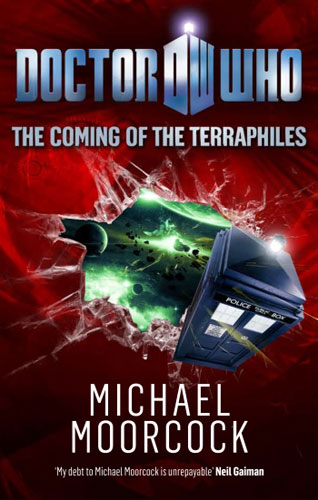 Miggea - a star on the very edge of reality. The cusp between this universe and the next. A point where space-time has worn thin, and is in danger of collapsing... And the venue for the grand finals of the competition to win the fabled Arrow of Law. The Doctor and Amy have joined the Terraphiles - a group obsessed with all aspects of Earth's history, and dedicated to re-enacting ancient sporting events. They are determined to win the Arrow. But just getting to Miggea proves tricky. Reality is collapsing, ships are disappearing, and Captain Cornelius and his pirates are looking for easy pickings.

I have read a few of the tenth doctor novels before this one, but gave up as they seemed too childish for an adult audience (maybe this is obvious?), however this eleventh doctor novel's release in a larger hardback format led me to believe it might be something different.

The Doctor and Amy Pond join the 'Terraphiles' - a group of lovers of old Earth from the distant future - to compete in a sport which is cobbled together from vaguely remembered and misinterpreted parts of modern day sports. Along the way, they have to save the universe.

I found this book to be really hard to read. The style is quite simple, with the text describing the action but lacking any real connection with the characters - there was no real attempt to align the narrative with Amy's (or anyone else's) point of view for more than a few paragraphs at a time, and this made it hard to empathise with them. The plot is insanely complicated and given that I had trouble I would expect young children to be completely lost. Characters appeared and disappeared throughout and although a small core were memorable most seemed to be there for no real reason.

Moorcock manages to make this a cross-over with the worlds of his own novel series, which seems a surprising move for BBC Books to allow into the brand, and this combined with the awful narrative leads me to suspect that there was very little proof-reading and they were desperate to have a novel with some sort of 'name' attached.

Overall I'm afraid that I can't recommend this book - even the characterisations of the Doctor and Amy seem completely out and I couldn't picture them in most of the scenes or speaking the lines.