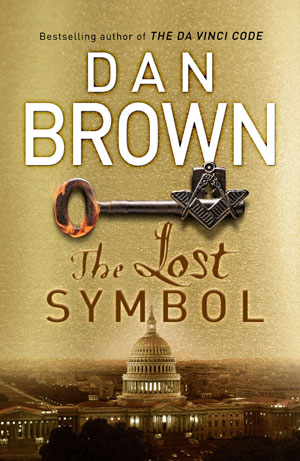 Harvard symbologist Robert Langdon is summoned at the last minute to deliver an evening lecture in the Capitol Building. Within moments of his arrival, however, a disturbing object - gruesomely encoded with five symbols - is discovered at the epicentre of the Rotunda. It is, he recognises, an ancient invitation, meant to beckon its recipient towards a long-lost world of hidden esoteric wisdom.

The final book in the Robert Langdon trilogy (one can only hope) tries to jump the shark even more than before. This time Brown ventures too far into the realms of fantasy for my liking in what should be a mystery thriller.

Langdon is caught up in a bizarre and intricate plot to uncover the deepest secrets of the Freemasons, which apparently include ancient mysteries of telekinesis.

Unfortunately, Brown seems only able to replicate what he's done before. Racing around Washington DC is just reminiscent of racing around Paris and Rome in the previous novels, and the bad guy is a merger of the earlier albino monk and camerlengo.

My biggest problem though was the focus on pseudoscience and religion. The scientific claims made about mind control are clearly ludicrous, and Brown's idea of the scientific process seems lacking in awareness of key aspects such as collaboration and peer review. His views on religion are condescending and most likely offensive to the relevant believers as well as to me.

Overall, the writing style has improved a little, though the chapters are all about four pages long, which means that as soon as something interesting happens in a scene we cut away. There is also a really annoying tendency to describe a big reveal to one of the characters and leave the reader hanging, unaware of what it is. Once would be okay, but Brown does it again and again.