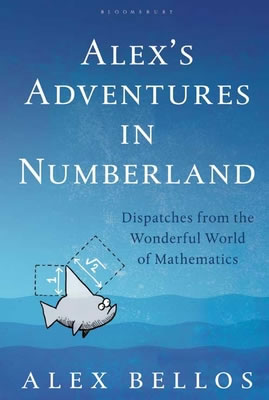 In this richly entertaining and accessible book, Alex Bellos explodes the myth that maths is best left to the geeks. Covering subjects from adding to algebra, from set theory to statistics, and from logarithms to logical paradoxes, he explains how mathematical ideas underpin just about everything in our lives. Alex explains the surprising geometry of the 50p piece, and the strategy of how best to gamble it in a casino. He shines a light on the mathematical patterns in nature, and on the peculiar predictability of random behaviour. He eats a potato crisp whose revolutionary shape was unpalatable to the ancient Greeks, and he shows the deep connections between maths, religion and philosophy.

Despite its rather cheesy title, this is a good primer on the basics of modern mathematics. It covers aspects from the invention of number right up to hyperbolic surfaces, mixing the maths with its history to tell the story.

The text is very accessible and the reader needs only the most basic prior knowledge of maths to comprehend. The only complicated parts are held back into the appendices and could be skipped by those not inclined to want to know more. Unfortunately I have more than a passing acquaintance with mathematics, and so for me some of the material covers was quite basic. For me it was too simplistic and focussed too much on things I already knew, but for someone without a mathsy background I think it would serve as an excellent entry point.

The author has approached maths with the methodology of a journalist, and so a lot of the book describes his meeting and interviewing some of the top mathematicians of the current era, humanising what could have been a rather dry subject. He is also adept at painting pictures with his words of the places and people he sees.

There are a couple of niggles though. The centre of the book contains a full colour glossy photograph section illustrating his travels, but the text never refers to them so the whole section feels disjointed. Also, the book ends very abruptly, the final chapter flowing into a couple of summary paragraphs without q real conclusion. I believe the book could have explored further - it barely touched calculus and only gently nudged university level material. I feel that having laid the foundations as he had the author could easily have continued a little further to at least mention some of where maths is now and looks to be going.

So, in summary, a good basis in mathematics, but more for the non-mathematician than someone with a real interest.