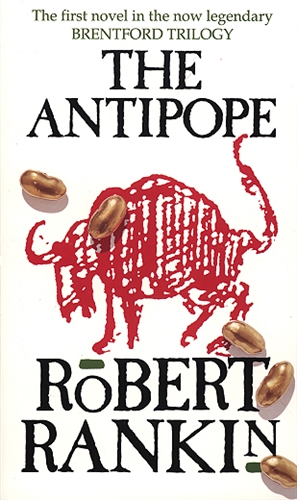 You could say it all started with the red-eyed tramp with the slimy fingers who put the wind up Neville, the part-time barman, something rotten. Or when Archroy's wife swapped his trusty Morris Minor for five magic beans while he was out at the rubber factory. On the other hand you could say it all started a lot earlier. Like 450 years ago, when Borgias walked the earth.

This book made me feel like a child again - and not in the good way. I felt as if I was reading something that was way above my head. Something that seemed like it was good, but something that I wasn't quite there intellectually to appreciate. The last time I remember feeling like this was aged 11 reading an Iain Banks.

The plot has a very episodic feel to it. Some self-contained events happen, then there is a gap of a few weeks, then some more events happen to the same characters in the same place. The characters themselves are hard to get a grip on. I found it hard to distinguish between them. They all seemed to be found drinking in every scene, and using forty words when one would do. In fact, the trend to using overly-flowery language is the main thing that makes this book difficult to read - it doesn't flow and it pulls the focus away from the story.

A lot of the elements early on in the book seem unnecessary and have little to no bearing on the main and later events. And other characters and storylines are present purely as a transparent set up for the end. I would have preferred something that blended better.

Overall, I found the plot was slow-moving, the characters irritating, and the language over-the-top. However, there were also moments where I actually laughed out loud, which is something that I can't say about many books. So that's pulled it back. I don't want to say it was bad because there's part of me that thinks it's probably very good but it's slightly beyond me to 'get it'. There were times though when I had to force myself to read it, so I'm afraid I don't expect to be continuing with the series int he near future.