They Do It With Mirrors 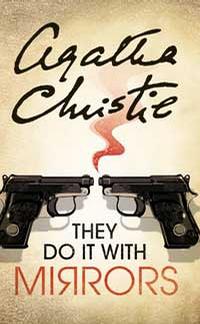 Miss Marple senses danger when she visits a friend living in a Victorian mansion which doubles as a rehabilitiation centre for delinquents. Her fears are confirmed when a youth fires a revolver at the administrator, Lewis Serrocold. Neither is injured. But a mysterious visitor, Mr Gilbrandsen, is less fortunate -- shot dead simultaneously in another part of the building. Pure coincidence? Miss Marple thinks not, and vows to discover the real reason for Mr Gilbrandsen's visit.

Agatha Christie constantly surprises by the differing styles of narration in her novels. Previously I've read tales told completely in the third person and first person from the point of a random character - but this one starts off in third-person limited, fixed with Miss Marple's point of view. This is another change from recent novels, with Marple playing a large part right from the start.

This is a short novel, and didn't grip me very much, perhaps because of it. There's not as much of the investigation as I have come to expect, and the vast majority of the narrative was the police interviewing the witnesses over and over again.

The set up was perhaps overly complicated, with many characters introduced in one go, which led me to confusion about who was who. The solution too was the first one that I thought of, which was unsatisfying, and later deaths seemed unnecessary.

"They Do It With Mirrors" was too much of an obvious title, and fairly gave the game away. Previous novels seem to focus on the nature of the murder, rather than the solution, and I hope they return to the more traditional formula.