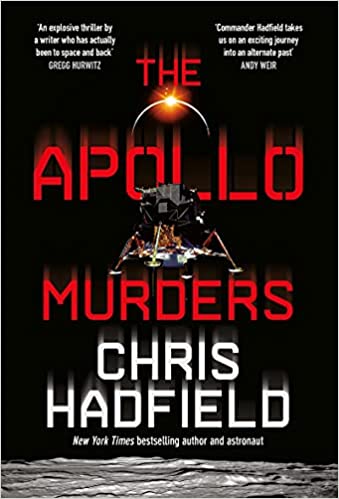 As Russian and American crews sprint for a secret bounty hidden away on the lunar surface, old rivalries blossom and the political stakes are stretched to breaking point back on Earth. Houston flight controller Kazimieras 'Kaz' Zemeckis must do all he can to keep the NASA crew together, while staying one step ahead of his Soviet rivals. But not everyone on board Apollo 18 is quite who they appear to be.

I’ve had this book on my shelf for a while and been nervous to start it. I’m not usually a huge thriller reader any more, but the appeal of an actual astronaut author overruled that in this case.

This is the story of a militarised Apollo 18 mission, an eighth moon mission from Nasa. And it’s quite well done. There’s a good mix of fictional main characters with real people who worked on the space programme at the time, and the characters are well rounded and built out, and full of interesting things to learn.

The plot is outlandish but in no way unbelievable. There’s quite a lot to set up the action, but it’s not unlike many other novels in the genre.

I did feel much more engaged through the middle part of the novel. The structure reminds me of Star Trek IV (“the one with the whales”), in which the middle of the film was written by a different screenwriter from the ends. In is case the parts of the story which occur in space were gripping much more than those parts on earth, and I wonder if this is because of that connection to the real space experience of the author. It’s reminiscent of the Apollo 13 movie in some respects, particular that realism feeling around the interactions between astronauts and their mission control.

The one stylistic choice that I found took me out of the narrative is that at moments of high tension, it switches out of the fast paced action to spend paragraphs on really technical detail before concluding the action. I think this is meant to heighten the suspense, but for me it just feels like glorifying something unnecessary instead of keeping the focus on the story.

Overall though, really impressed, and would totally read another novel by Hadfield.