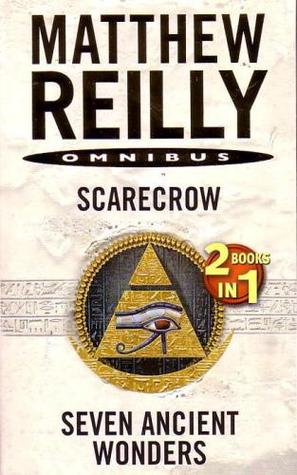 It is the biggest treasure hunt in history with contesting nations involved in a headlong race to locate the Seven Wonders of the Ancient World. 4500 years ago, a magnificent golden capstone sat at the peak of the Great Pyramid of Giza. It was a source of immense power, reputedly capable of bestowing upon its holder absolute global power. But then it was divided into seven pieces and hidden, each piece separately, within the seven greatest structures of the age.

I have attempted to read Matthew Reilly's 'Scarecrow' in the past but had to give up fifty pages in, but decided to give him another chance.

I'm afraid to say it didn't last more than four pages. I just couldn't cope with the writing style at all. It's very bitty. With lots of short sentences that are hard to read and refuse to flow. The jilted feel just seems to be trying to force you to slow your reading down and to me its wrong to do that to your audience.

So I'm afraid that's the definitive end to my patronage of Reilly's works. I also note that this series, which initially appeared to be planned for a full seven novels, has been pulled back to just three. I like to think this shows that it's not just me who cannot stand it.