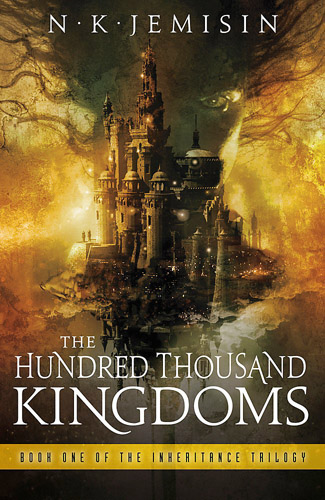 Yeine Darr is an outcast from the barbarian north. But when her mother dies under mysterious circumstances, she is summoned to the majestic city of Sky - a palace above the clouds where gods' and mortals' lives are intertwined. There, to her shock, Yeine is named one of the potential heirs to the king. But the throne of the Hundred Thousand Kingdoms is not easily won, and Yeine is thrust into a vicious power struggle with a pair of cousins she never knew she had. As she fights for her life, she draws ever closer to the secrets of her mother's death and her family's bloody history. But it's not just mortals who have secrets worth hiding and Yeine will learn how perilous the world can be when love and hate - and gods and mortals - are bound inseparably.

The Hundred Thousand Kingdoms is a superstate in a fantasy world, where the ruling family have done a deal with a god to keep themselves in power, enslaving other deities in order to subjugate the rest of the known world. Until of course the prodigal granddaughter appears, and things become more complicated than a simple succession.

This is the first of N K Jemsin’s books that I’ve read, so I wasn’t sure what to expect. The classic outsider alignment works well to gradually introduce the reader to the world, and to explore and understand the other characters.

I’m not sure I really got it though. I struggled to find the characters particularly compelling before the initial set up, and it felt a bit like I was following a character with little or no agency. It was hard to like any of the secondary characters, and I didn’t particularly engage with the more fantastic elements of the deities.

Although this is the first book in a trilogy, I don’t find myself inspired to continue reading.