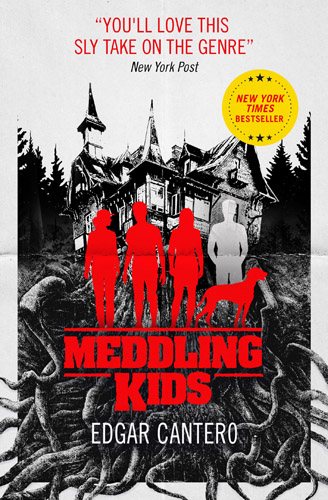 1977. The Blyton Summer Detective Club (of Blyton Hills, a small mining town in Oregon's Zoinx River Valley) solved their final mystery and unmasked the elusive Sleepy Lake monster another low-life fortune hunter trying to get his dirty hands on the legendary riches hidden in Deboën Mansion. And he would have gotten away with it too, if it weren t for those meddling kids.

1990. The former detectives have grown up and apart, each haunted by disturbing memories of their final night in the old haunted house. There are too many strange, half-remembered encounters and events that cannot be dismissed or explained away by a guy in a mask. And Andy, the once intrepid tomboy now wanted in two states, is tired of running from her demons.

I saw this book in the shops and was immediately intrigued by the concept. I was a massive reader of the sort of fiction it is pastiching as a kid - consuming the Hardy Boys, Three Investigators, all the Enid Blyton groups of child mystery-solvers, and more - and have been revisiting some of them as an adult. So how could I resist this, the story of what happens when the child detectives grow up and return to the scene of their childhood investigations.

It makes an excellent start - introducing the reader to a cast of characters who feel instantly familiar, and dropping joking references to Nancy Drew, the Famous Five, and I’m sure many I didn’t pick up on all over the place. There’s some deep reflection on what effect that sort of childhood might have had on them, and this leads into the plot…

Which is not quite what I was expecting, as it moves into something that has much more of a horror movie vibe than I was expecting. Perhaps drawing more on Scooby Doo than some of the tales I was familiar with. And I think that’s where it started to lose my attention, as there became less of a mystery to solve and more of a problem to escape from.

The narrative contains some odd choices of phrase which had me stumped - I can’t tell whether these are expressions of the author’s creation, or weird side-effects of his bilingual authorship and they are commonly known phrases that just don’t exist in my first language.

Overall - not quite what I was expecting all the way though, though still an interesting concept.