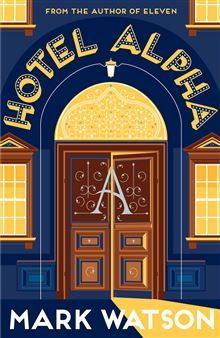 Howard York - self-made man and founder of London's extraordinary Hotel Alpha - is one of those people who makes you feel that anything is possible. He is idolized by his blind adopted son, Chas, and Graham, the inimitable concierge, whose lives revolve around the Alpha. But when two mysterious disappearances raise questions that no one seems willing to answer, Chas and Graham must ask themselves whether Howard's vision of the perfect hotel has been built on secrets as well as dreams.

I devoured a couple of Mark Watson’s novels before, and this one was no different. It’s the story of a hotel, but primarily of two of the regular fixtures - one the concierge who joins as a young man, and lives his life through the hotel, and the other the blind son of the hotel owner, whose education is provided by visitors to the hotel.

It’s a really interesting long-term tale of two closely related lives, with twists and side-plots and a complex inter-weaving of real-world events that help to ground the tale in reality, sometimes in a quite shocking way.

Overall very enjoyable, if a bit sad - and certainly a novel that makes the reader think quite deeply about what’s going on. Seeing the world from only two points of view means that there’s a certain amount that’s hinted at which we don’t see - and a revelation in the author’s afterword which I won’t spoil makes this even more interesting.