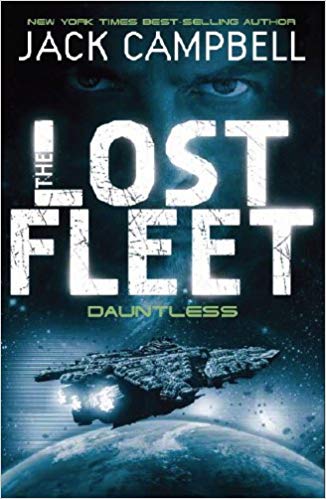 he Alliance has been fighting the Syndic for a century, and losing badly. Now its fleet is crippled and stranded in enemy territory. Their only hope is Captain John "Black Jack" Geary a man who has emerged from a century-long hibernation to find himself heroically idealized beyond belief. Now, he must live up to his own legend. Now in a brand new trade paperback edition.

Dauntless is the first book by Jack Campbell that I’ve read, and is the first book in the Final Empire series. It’s the tale of a war which has been raging for 100 years - and the return of a legendary Captain from the early days of the war, who finds himself somehow in command of a fleet on the back foot, attempting to return home.

It’s a great idea for a science fiction novel that marries a character out of time with a series of classic submarine-style space battles. The close alignment of the narrative with Captain Jack helps not only with exposition but with grounding the space stuff in a relatable character who ties the threads of the story together.

The world-building is well thought through, with lots of tantalising glimpses of more to come in the series - giving us just the amount we need to know for now while leaving the door open for lots more to explore in future novels - some of which I hope to pick up next week.

Probably the best military/space novel I’ve read - although my copy was littered with typos and other printing mistakes.