Madness is Better than Defeat 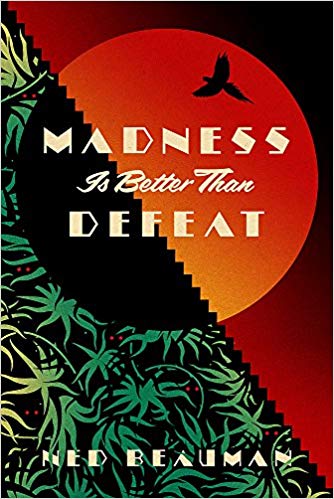 In 1938, two rival expeditions set off for a lost Mayan temple in the jungles of Honduras, one intending to shoot a screwball comedy on location there, the other intending to disassemble it and ship it back to New York. A seemingly endless stalemate ensues, and twenty years later, when a rogue CIA agent learns that both expeditions are still out in the wilderness, he embarks on a mission to exploit the temple as a geopolitical pawn. But the mission hurtles towards disaster when he discovers that the temple is the locus of grander conspiracies than anyone could have guessed.

I picked this book up very cheaply based on little more than the cover catching my eye. It has an interesting premise, but not one that really kept me engrossed.

It feels like it almost wants to be a Wodehousian romantic comedy, set in an era of exploration, where several well-to-do people who either know or are aware of each other are thrown into an unusual situation and have to interact while all maintaining their own agendas.

Despite a promising start, it slowed down rapidly in the middle portion of the book, to the point where I found myself not wanting to pick it up. So I put it down about halfway, and haven’t paid it another though since.

So not something I can recommend, I’m afraid.