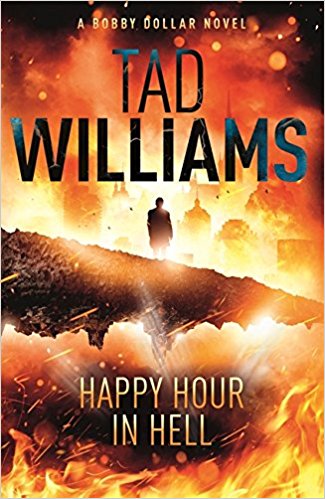 Bobby Dollar has a problem or four of epic proportions. Problem one: his best friend Sam has given him an angel's feather that also happens to be evidence of an unholy pact between Bobby's employers and those who dwell in the infernal depths. Problem two: Eligor, Grand Duke of Hell, wants to get his claws on the feather at all costs, but particularly at all cost to Bobby . Problem three: Bobby has fallen in love with Casimira, Countess of Cold Hands, who just happens to be Eligor's girlfriend. Problem four: Eligor, aware of Problem three, has whisked Casimira off to the Bottomless Pit itself, telling Bobby he will never see her again unless he hands over the feather.

Wow this book is grim. It’s some years since I read the first book in the trilogy, The Dirty Streets of Heaven, and I’d forgotten exactly how I’d felt after finishing it. In this, book two, Bobby Dollar, angel, heads to Hell to try to rescue his girlfriend.

The character’s travels through the many layers of Hell are covered in excruciating detail, far more than I could have thought possible, and it just becomes hard to read - there’s only so much that I can cope with in one train journey, and I often found myself stopping much earlier than usual just to escape.

The book took me a surprisingly long time to get through, given my usual reading speed, and this was brought home to me by the next two books I read being devoured in the course of two days, demonstrating the relief at getting away from how dark and depressing this book was.

I think it will be some time before I return for the conclusion of the trilogy.