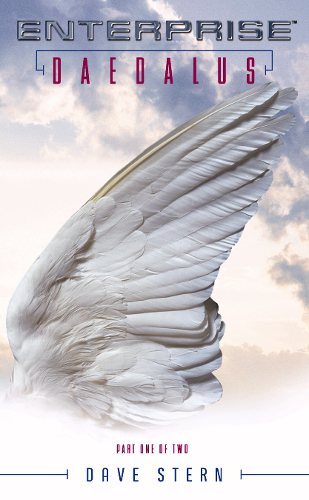 After a half-dozen years of research and testing, Starfleet prepares to launch its first warp 5 vessel-Daedalus. Propelled by a radical new engine designed by Earth's most brilliant warp field theorist, Victor Brodesser, the new ship will at last put the stars within mankind's reach. But on the eve of her maiden voyage, a maintenance engineer, Ensign Charles Tucker III discovers a flaw in Daedalus's design.

I've had this book for several years, probably since it was published, but until now had not got around to reading it. I soon found out why.

The book focuses on Trip Tucker, as Enterprise and its crew are captured by an alien dictator who seemingly appears out of nowhere while they are investigating a spatial anomaly. Trip manages to evade capture only to find himself being drawn into the local war.

The style of writing is horrendous in its simplicity. I found it really hard to focus on the words and found I was only skim reading the entire novel, something I've never known to happen before. It's writing in a very casual manner, almost like a first draft where the author is just bashing out whatever comes to mind rather than caring about how it comes across.

I found the absence of the other main characters annoying. I like ensemble pieces from my star trek novels, and even Hoshi (who is misnamed throughout as Ensign Hoshi rather than Ensign Sato) who seems to be tagging along for the ride is soon conveniently written out. The romance sub-plot feels unnecessary and in there only to pad out the length, and the main plot itself is filled with thinly veiled coincidences. Its most redeeming feature is the end, which gives a nice 'ah-ha moment' and a lot of earlier things start to click into place. It almost makes up for some of the really bad science from earlier.

Overall I have to say I was disappointed. I'm not sure how I'm going to bring myself to read part two. This came over as a badly thought through and badly written implementation of what could have been a nice idea.