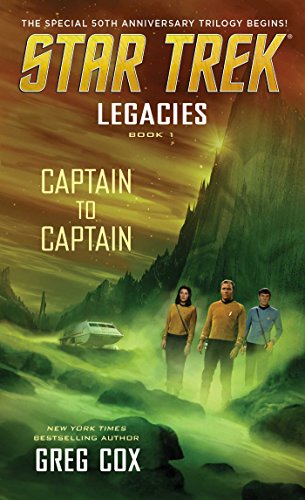 Hidden aboard the USS Enterprise is a secret that has been passed from captain to captain, from Robert April to Christopher Pike to James T Kirk. Now the return of the enigmatic woman once known as Number One has brought that secret to light, and Kirk and his crew must risk everything to finish a mission that began with April so many years ago.

Nearly two decades earlier, April and his crew first visited the planet Usilde, where they found both tragedy and a thorny moral dilemma. Today, the legacy of that fateful occasion will compel Kirk to embark on a risky voyage back to that forbidden world - which is now deep in territory claimed by the Klingon Empire.

I'm not really into reading The Original Series novels - being that my interest in Trek began in the late 90s (the first novel I bought was from August 1998) and even then TOS seemed incredibly dated to me. That said, this is the 50th anniversary, and this book is the first in a special celebratory trilogy, and so it felt only appropriate to get and read it.

The story takes place on the Enterprise, where a former crew member, Number One, has popped by for a visit which quickly becomes interesting for Kirk and Spock. Fundamentally, Number One (the first officer from the original pre-Kirk Star Trek pilot) is the star of the show here, and we follow her viewpoint for much of the story.

It's a good, action-packed tale that includes a number of concepts and familiar elements from the history of the franchise, mentions more, and introduces some interesting new aliens and artefacts that will clearly have ongoing involvement in the trilogy. I got more and more into the story as it progressed, much more than I expected for a TOS story, and really enjoyed reading it.

I’m now sitting desperately waiting for the second story to appear in my frequented set of bookshops so I can find out where the story is going to go next.