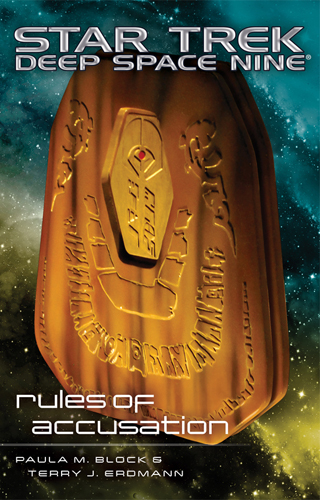 On the space station Deep Space 9, Quark's Public House, Cafe, Gaming Emporium, Holosuite Arcade, and Ferengi Embassy can't legitimately be called an embassy until the Grand Nagus dedicates it as such. Not that Quark really cares about Ferengi protocol, but a well-publicized dedication ceremony will naturally draw people to the bar. Everybody loves a good open house, which Quark can write off as Embassy expenses. It's a win-win situation, with him on both sides of the win. There's even a plan to display the original scroll of the Ferengi Rules of Acquisition and charge patrons by the minute to look at it up close. Nothing, of course, could possibly go wrong with this big plan. Absolutely nothing at all.

The second Deep Space Nine novella from Block and Erdmann, this story follows Quark in what would equate to one of the lighter episodes of the TV series, as he attempts to organise a party.

Compared to most literature in the Star Trek universe, this story is incredibly light hearted and comedic, the narrative full of jokes and references both to Star Trek and other pop cultures. It makes for a nice light break from the more serious adventures that we've had more recently.

It's a great little story that I enjoyed massively, and I hope Block and Erdmann become regular contributors to the literary canon.