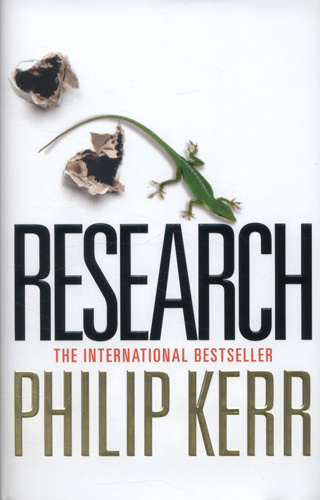 In a luxury flat in Monaco, John Houston's supermodel wife lies in bed, a bullet in her skull. Houston is the world's most successful novelist, the playboy head of a literary empire that produces far more books than he could ever actually write. Now the man who has invented hundreds of best-selling killings is wanted for a real murder and on the run from the police, his life transformed into something out of one of his books.

This is the first novel by Philip Kerr that I’ve read, and I’m not entirely sure I remember where I found it or why, but it’s been staring at me from my bookshelf for multiple months and last week happened to be where I was looking when I wanted a new book to read.

The cover describes it as a thriller, and I suppose I agree - the story follows a former ghost writer, who’s former employer is the chief suspect in the case of the murder of his wife… and the plot is fairly convoluted in several ways.

Novels about writers are often fun, and that’s true of this one - with a lot made of the group of authors that appear and their various foibles. It almost feels a little bit Inceptiony as the characters discuss the plots of their own stories.

The highlight for me is the occasional choice of phrase that Kerr drops in - a random observation or way of describing something that comes totally out of the blue, and is surprisingly delightful - it’s almost Terry Pratchetteque, although here only maybe six times through the novel rather than every second paragraph.

Overall though, I don’t think I was quite impressed enough to add Kerr to my list of authors I seek out - I’m not a massive thriller reader, and I found the developing story slightly frustrating. Don’t get me wrong, it’s far from the levels of frustration I feel when reading Jeffrey Deaver, but it’s a tiny step along the same irritation spectrum.