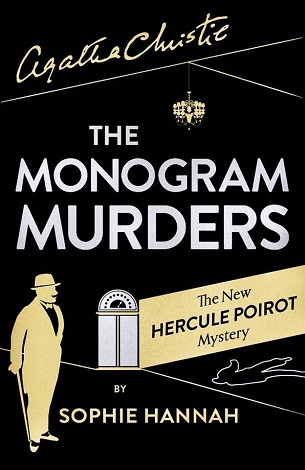 Hercule Poirot's quiet supper in a London coffee house is interrupted when a young woman confides to him that she is about to be murdered. She is terrified, but begs Poirot not to find and punish her killer. Once she is dead, she insists, justice will have been done.

Later that night, Poirot learns that three guests at the fashionable Bloxham Hotel have been murdered, a cufflink placed in each one’s mouth. Could there be a connection with the frightened woman? While Poirot struggles to put together the bizarre pieces of the puzzle, the murderer prepares another hotel bedroom for a fourth victim.

Sophie Hannah has been given the privilege and the responsibility of bringing back Hercule Poirot in his first 'official' continuation novel. A mystery triple death at a London hotel lands on Poirot's doorstep as he's living with our narrator, conveniently a local police detective.

While it was certainly interesting and entertaining to read, I don't think that Hannah's quite got a grasp on Christie's style, has overcomplicated the plot, and the books feels in places more of a parody than Christie's own writing does. The mystery itself is complex to the point that the number of false endings left be baffled as to what the actual conclusion was, and it felt like there were still loose ends which Poirot had not tied off.

The first-person narration seems to shift in time, in some places portraying itself as being written shortly after the events depicted, and in other place long after. The narrating character, a new one that Hannah introduces, has an irritating habit of insinuating things about his own sexuality over and over again, which while an interesting aside at first, becomes too blatant after much repetition and just feels awkward.

The words 'little grey cells', while often used by Christie, are over used here which just ends up being distracting from the plot. In conclusion, the story works fairly well for the most part, and there are hints of Christie's style, but overall it's just not up to a standard that respects Poirot's original creator, and I think it would probably have been better to let the Belgian detective stay resting.