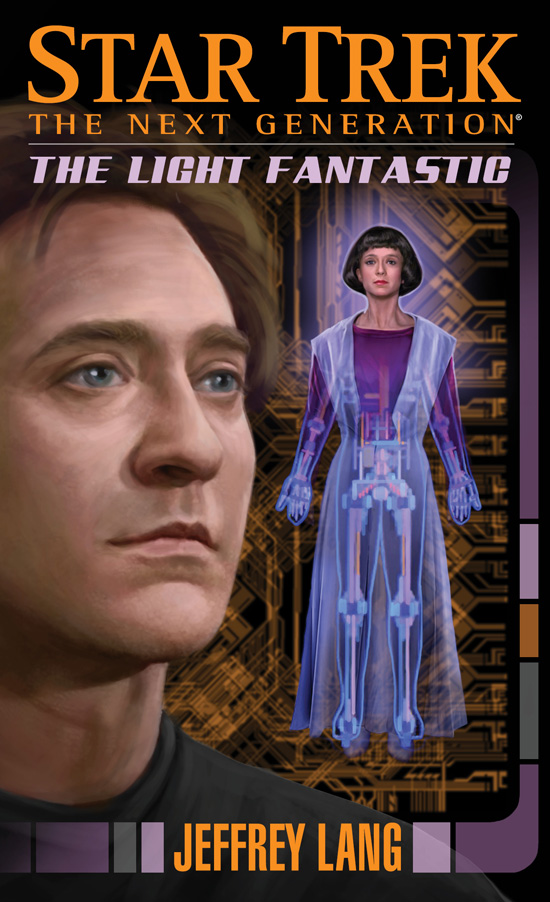 Complicating Data's new life is an unexpected nemesis from years ago on the USS Enterprise - the holographic master criminal Professor James Moriarty. Long believed to be imprisoned in a memory solid, Moriarty has created a siphon into the 'real' world as a being of light and thought. Moriarity wants the solid form that he was once told he could never have, and seeks to manipulate Data into finding another android body for him to permanently inhabit, even if it means evicting the current owner, and even if that is Data himself.

Jeffrey Lang returns to Trek to follow up on the events of the Cold Equations trilogy, which in turn followed from Lang's own Immortal Coil. I've not read Immortal Coil, so I can't really say how much is referenced back to that book, but one thing this book does do is refer back to almost every android that's ever appeared in Star Trek.

Despite the serious subject matter, the narrative is quite light and the characters in particular are presented in a similar manner to some of the more jokey episodes of The Next Generation. In fact the main characters of this story are probably the best part, each having real depth and growing through the novel.

The plot is quite fun too, a cross between a heist and Sherlock Holmes, and is entertaining throughout despite posing some good moral questions in the Trek style. I really enjoyed the non-linear nature of the narrative, continue happy jumping around the characters' timelines to gradually reveal more to the reader.

I can't really pick out anything to criticise - although I thought I spotted one or two continuity glitches (but I might be the one misremembering). A great fun read, and one that I hope Lang is able to follow up on.