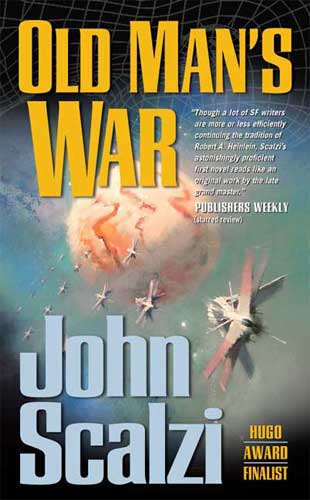 With his wife dead and buried, and life nearly over at 75, John Perry takes the only logical course of action left: he joins the army. Now better known as the Colonial Defense Force (CDF), Perry's service-of-choice has extended its reach into interstellar space to pave the way for human colonization of other planets while fending off marauding aliens.

The CDF has a trick up its sleeve that makes enlistment especially enticing for seniors: the promise of restoring their youth. After bonding with a group of fellow recruits who dub their clique the Old Farts, Perry finds himself in a new body crafted from his original DNA and upgraded for battle, including a brain-implanted computer. But all too quickly the Old Farts are separated, and Perry must fight for his life on various alien-infested battlegrounds.

This is the second book by John Scalzi I've read, after Redshirts (a space opera parody), and the first in his series. It's the first 'hard' science fiction novel that I can safely say I've really enjoyed reading - those I've read recently have either read like pulp paperbacks from several decades ago or were impenetrably dense and lacking in plot or character.

This is the story of a widower of 75, who signs up for the military (as is the custom), and ships out from Earth to defend its colonies in whatever manner is necessary. It's a fascinating universe with an almost endless amount of questions to explore. Scalzi raises an array of moral questions in the grand tradition of science fiction, and allows his characters to explore some of them.

The character is strong and easily relatable, and the first-person narrative gives a really good view on the events and thought processes, unlike some pulp characters who feel more like cartoons than real people. The plot moves at a good pace, with an episodic nature that manages not to feel like it’s breaking the flow.

Overall a really enjoyable story that really made me think. I loved it, and will definitely be returning to the universe to try out the sequels.