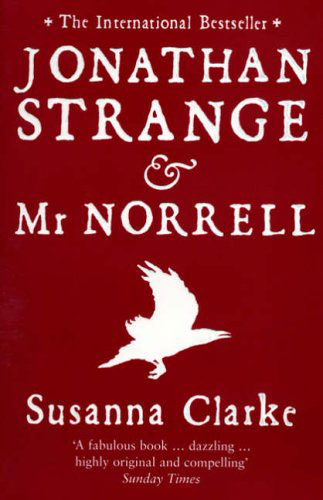 The year is 1806. England is beleaguered by the long war with Napoleon, and centuries have passed since practical magicians faded into the nation's past. But scholars of this glorious history discover that one remains: the reclusive Mr Norrell whose displays of magic send a thrill through the country. Proceeding to London, he raises a beautiful woman from the dead and summons an army of ghostly ships to terrify the French. Yet the cautious, fussy Norrell is challenged by the emergence of another magician: the brilliant novice Jonathan Strange. Young, handsome and daring, Strange is the very opposite of Norrell. So begins a dangerous battle between these two great men which overwhelms the one between England and France. And their own obsessions and secret dabblings with the dark arts are going to cause more trouble than they can imagine.

This book has been tempting me for a good few years - I remember the mass poster campaigns across Britain's railway stations in its early days that always made me wonder whether it would be something for me - and yet it took a personal recommendation from a friend for me to actually pick it up. It's the story of Britain's only two magicians in the era of the Napoleonic war as they rediscover lost magical arts from the country's history.

The book is big. It's 1000 pages but feels as you read it to be so much longer. The language is old fashioned, presented in a first-person narrative that comes across almost as a parody of late-nineteenth century writing styles, and this makes it harder to read than the smooth flowing narrative of modern writing - it took me a week to get to page 200, and another week to get to 500. At that point I stopped.

I'd been told that things didn't pick up until a couple of hundred page in, so I persevered for as long as I could, but the book wasn't gripping me, and the opportunity cost of other books I could be reading was too great for me to continue. I found that every time I started reading that I could go for about 20 minutes before falling asleep - even on trains where I normally read forever. I had nothing but my time invested and there was no feeling that I needed to find out what happened to the characters, none of whom I found I particularly liked.

Overall - abandoned halfway with no interest in continuing, so I can't recommend it at all.