Gardens of the Moon 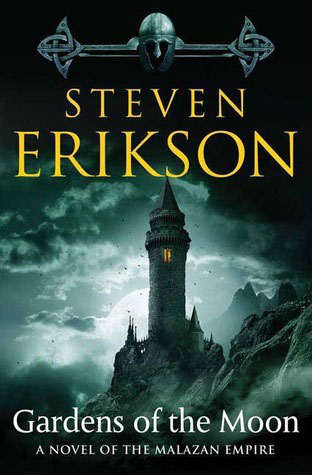 Even its imperial legions yearn for some respite. For Sergeant Whiskeyjack and his Bridgeburners and for Tattersail, sole surviving sorceress of the Second Legion, the aftermath of the siege of Pale should have been a time to mourn the dead. But Darujhistan, last of the Free Cities of Genabackis, still holds out - and Empress Lasseen's ambition knows no bounds.

However, it seems the empire is not alone in this great game. Sinister forces gather as the gods themselves prepare to play their hand.

The first book in what looks to be a vast series of novels by two authors, Gardens of the Moon’s introduction suggests that it’s not a book for everyone, and that many people drop out at the start. The author’s position is that he has thrown the reader straight in without introduction, and that in doing so some readers are alienated. If you get to page 250, he says, you’ll be hooked forever.

Sadly, I’m one of the group who didn’t reach page 250. I got just past page 200 before deciding, reluctantly, that I didn’t have enough motivation to continue reading, and realising that the dread of this specific novel was putting me off reading in general.

I disagree however with the author’s suggestion that being thrown into the deep end of the plot was the problem. I didn’t feel that this novel threw plot straight at me any more than any other I’ve read. What I felt was missing was any sort of connection with the characters. The characters that seemed there to develop into starring roles came across as blank - empty of personality and just there for the plot to happen to. I thought that the story entered at the right point - it didn’t explain a load of background (but what novel does?) - instead allowing the reader to pick things up as the characters encountered them.

I can’t say it’s a bad book - clearly it’s a popular series and the story is well built, but I didn’t engage with the characters and couldn’t bring myself to continue reading something I wasn’t enjoying at the expense of time with other books. As such, it’s really hard to attribute a star rating to the book.