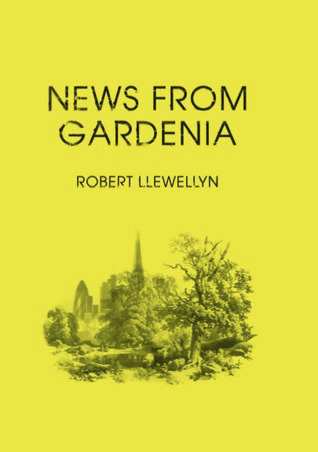 When Gavin Meckler's light aircraft encounters a mysterious cloud near Didcot power station in Oxfordshire, and lands in a nearby field, he is bewildered to discover the power station is nowhere to be seen. In the eerily quiet landscape, a strangely silent tractor is making its way towards him. Gavin discovers he has landed two hundred years into the future, into a world that is wholly recognisable and yet utterly different.

News from Gardenia is a delightful book that looks at a possible future for the world. Gavin Meckler sets out for a short flight in his electric plane, only to discover when he lands that two hundred years have past, and he's now living in an idyllic and slightly creepy utopian future.

I found the world Robert Llewelyn has envisioned to be a fascinating and almost entirely plausible future for Britain and the rest of the world, and the concept of his novel refreshingly different.

The plot however felt like it was only the supporting act - there to give a way to show off the imagined future rather than being of any particular interest in itself. Gavin is a surprisingly bland character (although there are hints this might be by design) and doesn't generate much sympathy in the reader.

I wasn't sure quite what to expect from a story of a positive future, but it works well and made for an interesting read. I look forward to finding out what happens in the sequel and whether we can learn a little more about what's going on and whether there is something more to the plot.