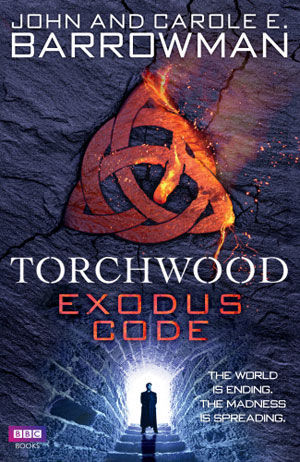 It starts with a series of unexplained events. Earth tremors across the globe. Women being driven insane by their heightened and scrambled senses. And the world is starting to notice - the number one Twitter trend is #realfemmefatales. Governments and scientists are bewildered and silent. The world needs Torchwood, but there's not much of Torchwood left.

Captain Jack Harkness has tracked the problem to its source: a village in Peru, where he's uncovered evidence of alien involvement. In Cardiff, Gwen Cooper has discovered something alien and somehow connected to Jack. If the world is to be restored, she has to warn him - but she's quickly becoming a victim of the madness, too.

Exodus Code is a Torchwood novel by John Barrowman, star of the TV series, and his sister Carole. The story, set following the fourth TV series ('Miracle Day'), sees violent uprisings in the sea bed around the world and groups of women suffering debilitating synaesthesia.

The book is split into four parts - three of them read like a typical thriller - action and outlandish events, unlikely prescience and deus ex machina. The remaining part reads like classic Torchwood, focussed on Gwen and her family in Wales, dealing with the characters' lives and emotions. This was my favourite part of the story. I was also impressed with the depiction of synaesthesia, which while I have no personal experience of, came across in a believable and understandable manner.

I found the plot confusing to follow, and wasn't convinced at the end that the narrative added up properly - it often seemed like things were set in motion for a particular purpose before the characters knew enough to do so, and there was very little explanation of exactly what was happening and how the characters solved the problems they faced.

Torchwood seems to have transformed into a 'save the world every adventure' type of series, rather than the smaller focus it originally had. This feels unrealistic and a bit like jumping the shark. Overall I'm afraid to say I didn't find this book satisfying and did not feel it added much to the Torchwood story.