The Death of Princes 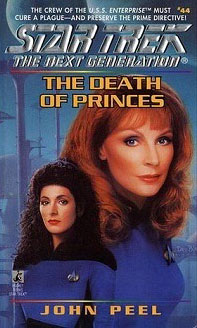 Dangerous assignments come in pairs when Captain Picard and his crew are confronted with two desperate missions on two different worlds. On the planet Buran, newly linked to the Fedration, a mysterious disease devastates the population-and turns them against the visitors from the U.S.S. Enterprise. Meanwhile, on nearby lomides, a renegade Federation observer has disappeared, intent on violating the Prime Directive by preventing a tragic political assassination. While Dr. Crusher struggles to find a cure for the plague ravaging Buran, Commander Will RIker leads an Away Team to lomides. Their forces divided, Picard and his crew find themselves the only hope of two worlds.