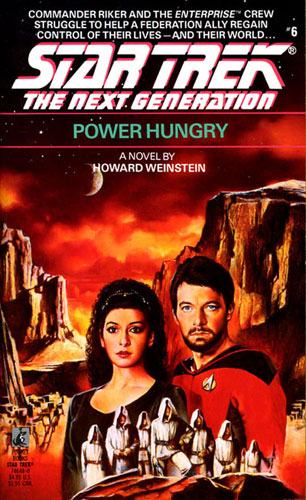 Sent to deliver emergency famine relief to the planet Thipoa - the Federation's only allies in a critically important sector of space - the crew finds a brutal dictatorship, one more concerned with preserving its own powers than protecting its citizens, or the world they all share.

A fairly run of the mill Next Generation novel set during the second season, in which Picard and his crew find themselves in a tricky prime directive situation when escorting aid to a planet suffering from extreme climate change.

It's clearly an epistle from the author on the threat that the world faces from a changing climate as a result of human activity, and though this fits with the traditional Trek ethos of pointing a mirror in the direction of the twentieth century, it's delivered with such a lack of grace that it feels like the message is being hammered home at the expense of a thrilling plot.

The author makes some attempt to introduce some new elements of characterisation amongst the crew, but largely this falls flat by virtue of it not being able to be picked up on in any later stories, instead feeling like it's just been dropped in because he felt he had to use all the characters even if they weren't necessary to his plot.

It's not an awful book, but it certainly didn't grip me or excite me about where the story was going, and rather than inspire me to think more about the issues brought up, it's kind of saddening that we still haven't done anything to rectify our own situation some 25 years later.