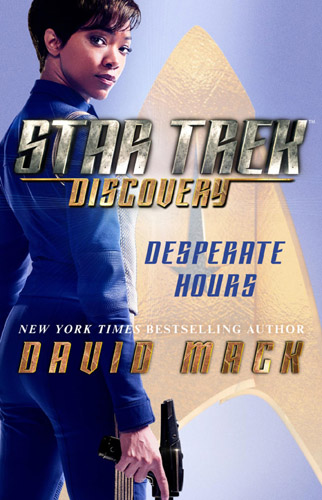 Aboard the Starship Shenzhou, Lieutenant Michael Burnham, a human woman raised and educated among Vulcans, is promoted to acting first officer. But if she wants to keep the job, she must prove to Captain Philippa Georgiou that she deserves to have it.

​David Mack has the honour and challenge of being the first tie-in author to dip his feet into the world of Star Trek: Discovery - the seventh TV series in the franchise. As a novel released the day after the first episode is broadcast, it's hard not to take anything it says with a pinch of salt (remember Data's backstory from the novelisation of Encounter at Farpoint - later completely changed by the TV series), but it seems Mack has had full access to the writers and scripts from the TV production team and the series is being written as one whole rather than discrete episodes, so maybe this will stand the test of time.

This story is set a year before the opening episode of the TV series, and sees Burnham as a newly minted first officer facing a distress call from a rebel colony. It also features a guest appearance by a familiar ship and crew member and goes some way to dealing with some of the questions that long term audiences might have. That said, I do wonder if these aspects are being explored only in the novels what the point was/is of having set the story up in quite this way for TV.

It's a fairly average Trek novel actually. A bit reminiscent of the early TNG novels in terms of the plot. The pre-TV setting is good as it means Mack is free to play around with the characters and not be bound by putting them back in the box. He does a fair bit to give background to both Burnham and Saru which goes beyond what we've learnt from TV, and this to me is what makes the book most compelling.